When the real fixes are cheaper than bandaid solutions, why would we choose to stick with bandaids?

Edmonton’s most vulnerable citizen is her homelesss neighbour.  These (our brothers and sisters, parents and grandparents, sons and daughters lost to the street) must journey daily from soup kitchen to drop-in to emergency shelter with long walks all day (or all night) being chased out of public spaces, with little access to bathrooms, vulnerable to attack or theft as soon as they try to get some sleep; and battling addictions or mental health concerns on top of physical ailments and injuries.  Today around 70% of Edmonton’s street population is chronically homeless; with most of these losing years (even decades) to the street, and with many succumbing to their illnesses every year.

For the chronically homeless real help is more than a shelter bed, a hospital bed, or a prison bed.  Real help (the kind that’s working!) is  Permanent Supportive Housing.  But building these places requires a significant investment.  The question is: Will we pay it, and is it really cheaper than the status quo?

In recent years, City Council has identified the need for 900 units of Permanent Supportive Housing (PSH) as critical to successfully addressing homelessness in our city.  PSH provides stable housing paired with wraparound support and care for people with multiple complex needs including mental health, addictions, trauma and disabilities or physical ailments.

The Provincial government is a major player in the work of addressing housing and homelessness.  Health care funding and capitol dollars for affordable and supportive housing fall primarily in their jurisdiction, with significant assistance and a shared responsibility from partners at both federal and municipal levels.

As belt-tightening looms over the upcoming budget discussions in our province there is concern that effective help and treatment for the chronically homeless will be one of those areas that is lost.  The province has announced additional funding for 4000 addiction treatment beds, which is very good news and much needed.  But there is some concern that other needed investments may be dropped, slowing some of the positive movement that Edmonton has been able to celebrate in the last few years.  A main pillar of success in help to people experiencing chronic homelessness is Permanent Supportive Housing.

In 2018, CRHI identified Permanent Supportive Housing (PSH) as one of our four critical priorities.

We continue to give our support for this critical effort on the conviction that we can and we must do better to help our most vulnerable neighbours. The financial case only cements our conviction that this is the right way forward.  the cost of doing better is actually less than the status quo.  Doing it wrong is not only ineffective, it’s also more expensive than doing it right!

Q:  Is it really cheaper than the status quo?  Consider this portrait from the City of Edmonton

“Providing appropriate housing for people experiencing homelessness generates significant cost savings to emergency, health, and justice systems in addition to freeing up resources for other Edmontonians in need of those services. Individuals who are sleeping outside are more likely to have complex co-occurring mental and physical health challenges, often compounded by substance abuse, that result in frequent and inappropriate use of health services. A hospital stay for a person experiencing homelessness costs more than $8,000 per day and an emergency room visit $840.

The negative financial impacts are demonstrated in a 2007-08 study that found that just ten heavy individuals system users among the homeless population cost Alberta Health Services an estimated $3.5 million alone in a single year.  This impact is consistent with other major cities across Canada, evidenced by a 2014 study that followed 990 people with mental health issues who were experiencing homelessness in five Canadian cities cost systems $53,144 per person on average annually.

Over the last ten years, Edmontonians have made significant progress in ending homelessness. Since 2009, more than 8,400 people have been housed and overall homelessness in our city has been reduced by 43 percent. In addition, these efforts saved an estimated $920 million in health and justice system costs.”

Up front, PSH requires a relatively large investment of land, capital dollars and operating dollars.  Here are the numbers the City of Edmonton has put forward to federal and provincial partners in a whitepaper submitted in September of 2019: 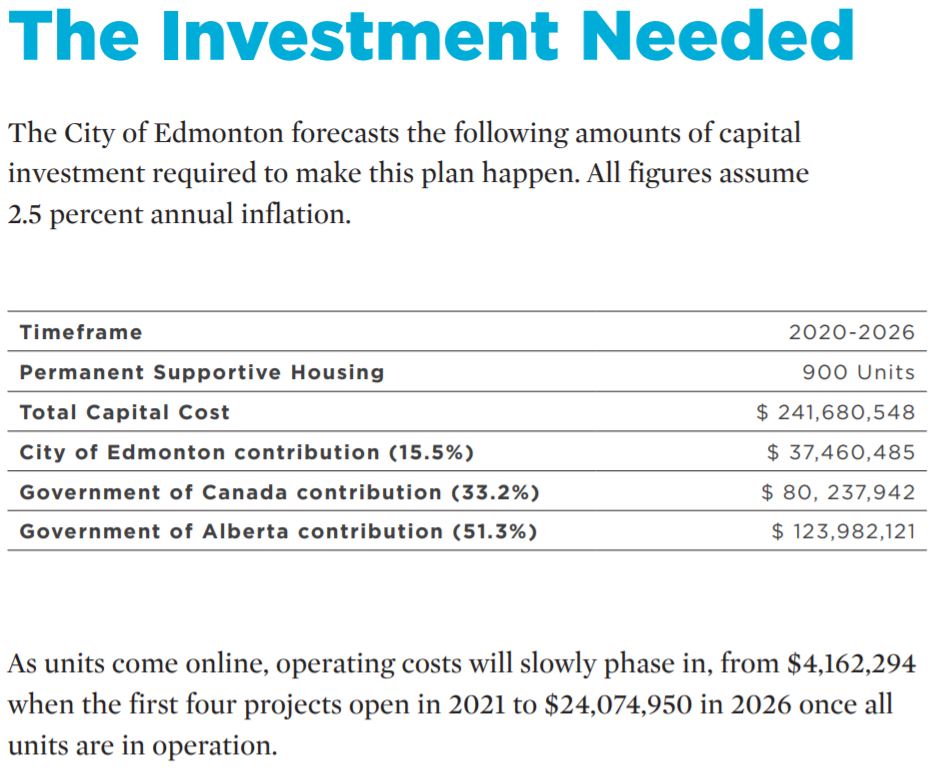 PSH facilities are created on a sliding spectrum from high to low intensity, and different kinds and levels of supports.  At the high intensity end of the spectrum, we see a facility like Ambrose Place here in Edmonton; a facility that the city featured as an example to accompany their submission to the Province. As you will see, even this more expensive example of PSH is still saving money.

Consider this case study of Ambrose Place; an example of 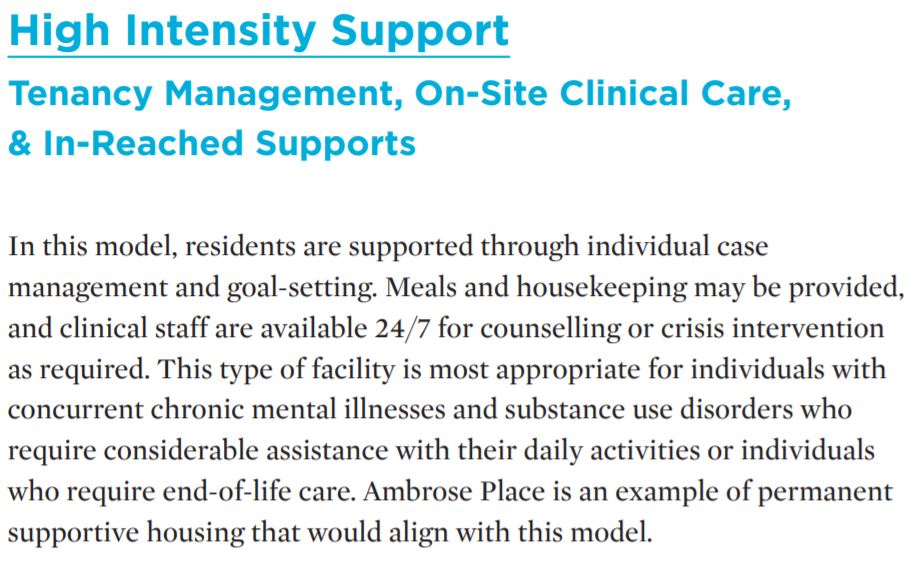 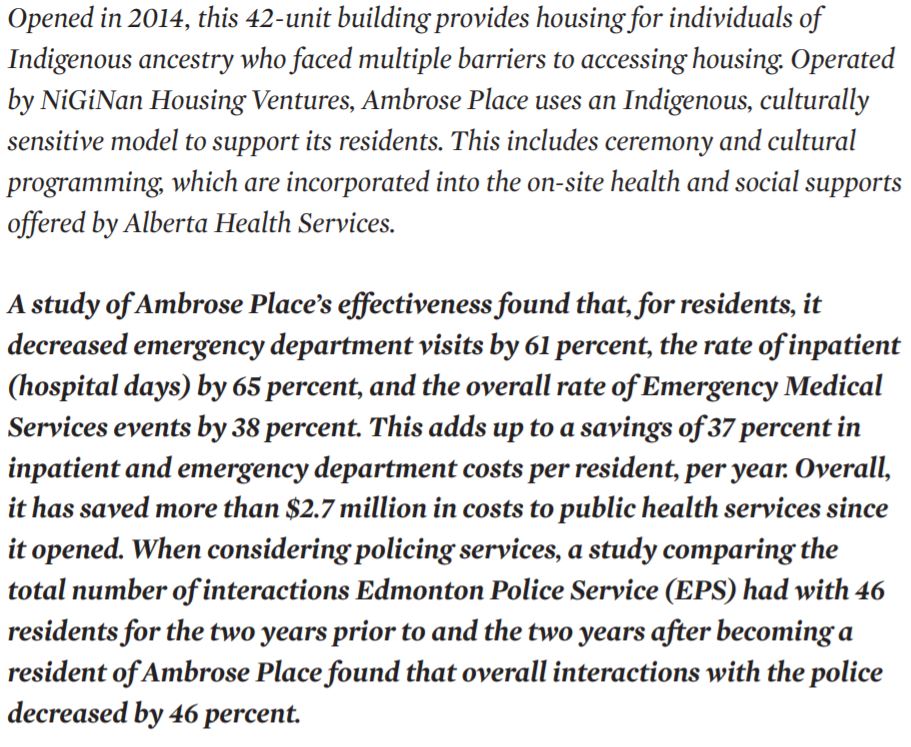 As the provincial budget is released in the next few weeks, CRIHI asks you to join us in watching for continuing funding for Permanent Supportive Housing.  Creating places of real healing and hope is the only way to help some of our most vulnerable neighbours.  It is cheaper than surrendering to bandaid solutions, and it actually works to help people!

Let’s get this right!