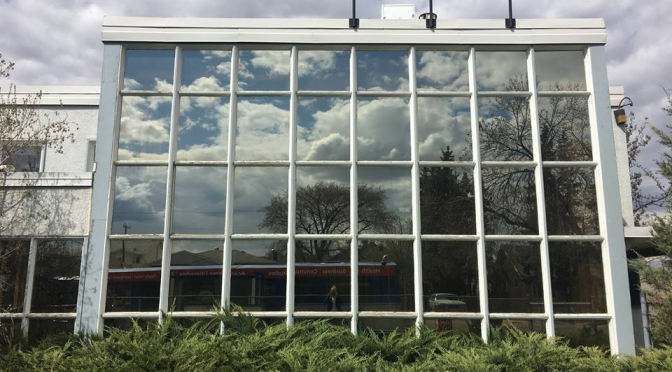 Here’s how this story started:  Recognizing growing needs and struggles experienced by their neighbours in West Edmonton, several Christian churches (large and small) met together with the City of Edmonton to consider what they might collectively do to help out.

The coalition met with Murray Soroka, who was working with a few others doing some street work in the community.  Together, they agreed that a drop-in/resource centre was needed.  So they went and did it!  A society was formed, a lease was signed, volunteers donated time, money and expertise in renovating and preparing the space (including Plumbing, drywall, finishing carpentry, painting…), and they opened in June of 2006 on Stony Plain road.  Their starting goal was simple:  “Building community through relationships.”  They made a place where vulnerable community members could come and build relationships with the faith community.

At the beginning, Soroka says, “we were heavy on relationships, but light on everything else.”  But they provided laundry, showers, shopping cart storage (a safe place to put your stuff during meetings or appointments), and lots of meals.

A year in, they started helping people experiencing homelessness find housing.  In 2007, they helped house 100 people across West Edmonton.  They helped provide a damage deposit, and a utility deposit and helped people get settled.  Some of these people needed just that little bit of help, and are still housed today from that initial work!

In 2008, they ran two pilot projects exploring Housing First, a new strategy to start by housing and then providing supports to people.  Then in 2009, Housing First took off, and they have been involved ever since.  Through their own efforts and housing first, have housed over 1100 people.

In 2010, they secured funding to build Canora place; an affordable housing complex with 24-7 on-site support.  For help with more difficult issues like mental health and addictions, residents are connected with outside agencies and services.  Ongoing donations help keep Canora a safe and affordable home.

In 2011, they started a social enterprise, employing vulnerable populations paying a living wage, providing job training and experience; part of their employment program.  Today, they operate five for-profit businesses that pay a living wage (around $17/hr).  The hope is that these businesses may some day provide wealth for the organization to help sustain the work they do.  Through these businesses, they provide for forty full-time jobs and put 1.5 million in wages back into the community!

CBC News featured a story on one of these businesses at: http://www.cbc.ca/news/canada/edmonton/mattress-recycling-edmonton-homeless-1.4120502

Food security is also one of their five pillars.  They are a founding member of Food4Good, that helped start over forty community gardens.  They host Collective kitchens, with opportunity for food education and awareness.  Food4Good supports pop-up markets, selling groceries up to seventy percent below market.

In 2016, JPWC made inroads into Wellness Education with the goal to ‘build resiliency into the lives of community members through education.’  The Edmonton Public Library provides basic computer training.  An Art teacher produces art therapy.  Financial institutions come in to provide financial literacy.  They also have a mental health worker, an addictions counselor, grief counseling, and assistance with tax returns (right until the end of October); which is a critical way to lift people out of poverty.

In September 21, 2017, they officially opened the Jasper Place Wellness Centre (celebration picture below), a Medical Centre where they provide primary care to vulnerable populations.  Currently, they have two doctors on staff, and they hope to eventually be a full-time clinic with hours from 9am-9pm, six days a week with five to seven doctors.

Today, JPWC serves around 800 people every year in West Edmonton.   Murray Soroka says it matters that “we are outside of the core.  Vulnerable people can reside in all parts of our great city.  We need to have supports where the people are.”

Starting with a coalition of caring communities that saw the need and wanted to respond; JPWC has become an incredible hub for help.  They see themselves as a community development organization, and a wellness centre; a place where people can find help with the basic things, get over some big hurtles, and become contributing members in their local community!

Look what’s possible when we work together!