At the recent launch of this summer’s Interfaith-Habitat works on July 7, Alfred Nicolai, CEO of Habitat Edmonton told us a story about what moved a change in the heart of a neighbor.

A few years ago, Habitat for Humanity was building thirty units of housing in the Beacon Heights community. A large piece of grass that had always been green space was now to be made into homes. But as is often the case, this change sparked resistance and pushback from neighbours. A few neighbours got together to say, ‘Let’s stop this!’ They got out their clipboards and went door to door to get support, and stood up in opposition to the project.

The conversation covered the usual ground: concerns over parking and an increase in traffic, how close the houses would be built together. And as the city reports came in response, clarifying that these issues would not be problematic, this group continued to stand strong against the change.

One day, one of the lead women in opposition to the Habitat project happened to hear her son talking with a friend. His explanation of why they were opposing the project was as follows:

As her son said those words, this mother was deeply convicted. What was she teaching her children? Was this her inner voice being spoken out loud from the mouth of her son?  She found she had fallen into a horrible trap. How could she not want hard-working families as neighbours who were working towards a better future for their children? It took her son’s voice for her to realize that there was bigotry hidden inside the other concerns around structure, traffic, parking etc. That it didn’t matter what god they worshiped or the colour of their skin. Those people were very much like us!

Following that, she turned 180 degrees. She phoned Habitat for Humanity and apologized for her opposition. She then became a proponent of the project. Today, she continues to support Habitat and volunteer, helping families build a better future for their children.

What about those people who have found their home in the housing development? Anderson gardens people are leaders in the Beacon Heights community league and the local school. And their kids have lots of sleepovers! 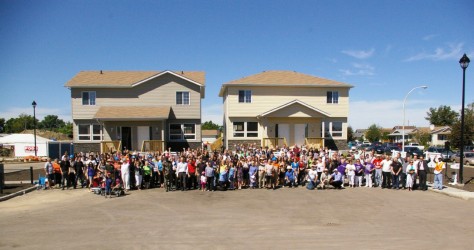